Under the Sale and Supply of Liquor Act 2012, you must be over 18 to browse and purchase from this site. Please confirm that you are over 18. 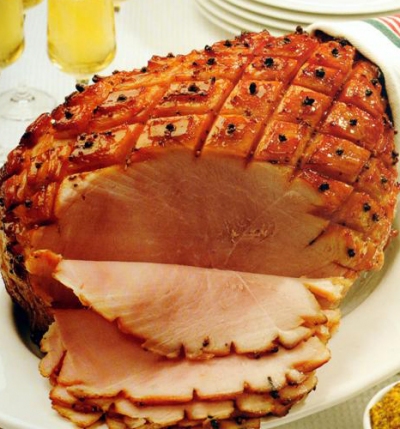 Glazing a ham is easy and delicous when it comes straight from the oven, warmed through and served as a centrepiece for Xmas dinner. The Ataahua Rosé is so good served chilled on the Xmas table with glazed ham – and you can do a large side of salmon in a similar fashion - new potatoes, baby peas, crisp green salad with an orange and mint dressing Mm mm.

And it is so delicious Boxing day served simply with mustard, chutneys and crusty bread plus new season tomatoes and green salad.

Glazing your own ham is easy just following a few simple steps. It will take about 30 minutes to glaze the ham or 2 hours to heat through a precooked whole ham (around 9kg) if you want to serve it warm.

Preheat the oven to 180°C. With a sharp knife, cut through the skin around the bone about 6cm from the end. Do this in a pattern if you can, such as zigzag. Then carefully slice under the rind of the ham at the underside and carefully slide your fingers between the rind and fat layer. The rind will come away easily but can tear so work slowly, gently forcing your fingertips between the layers. You need to retain as much fat as possible for scoring.

Using a sharp knife, score the fat in diagonal lines 3cm apart and just down to the flesh. Repeat from the other side of the ham to create a diamond pattern. Place the ham in a large baking dish.
If you want to serve your precooked ham warm, you need to keep it moist while heating by basting. It will take about 600ml of liquid such as dark beer, orange juice or cider, or wine if you like. Reserve a little liquid to use in the glaze. Pour the rest over the ham.

Place in the oven and bake for about 2 hours, basting every 20 minutes.

Glazing
For a glaze you need to have a mixture that is quite thick so won’t run straight off and the sugar is important to give a caramelised finish and taste. I use a basic mixture of 1 cup brown sugar combined with enough liquid (as above) to make a paste, then flavour it with 1 tablespoon orange zest, and teaspoon each of ginger and ground spices such as crushed star anise, ground cloves and cinnamon. You can also decorate the ham at this point with a whole clove in the centre of each scored diamond or thin slices of orange or pineapple. (I don’t normally bother with this, but if you have the time....)